What’s the most common strategy for testing an SAP application change — be it a custom update, a service pack or an emergency fix?  Don’t test the change at all! 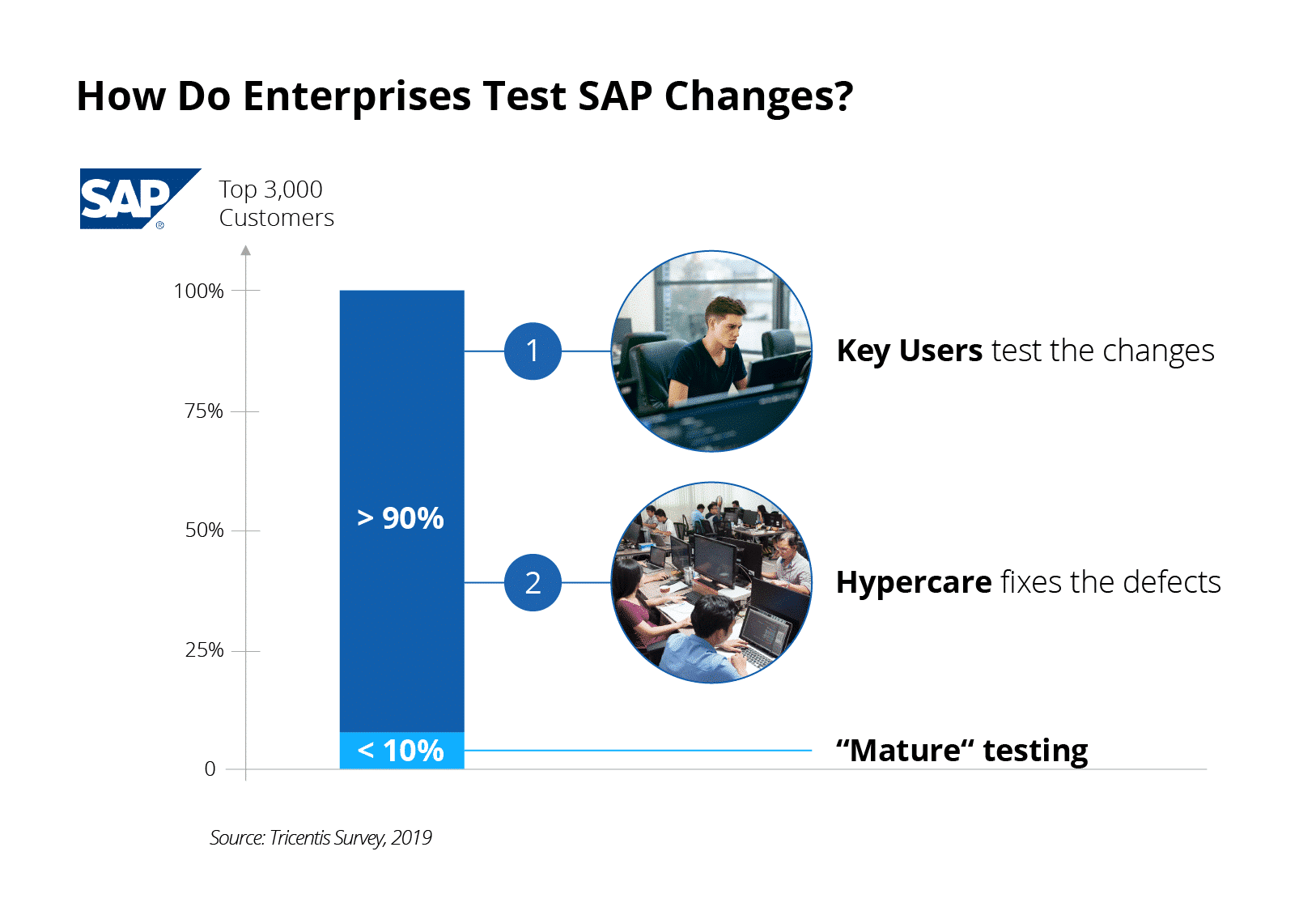 OK, let me back up – this provocative statement is not entirely accurate. Most organizations do some testing of their SAP applications. When an update needs to be deployed into production, they make their key users test it.

But guess what? Key users don’t like to test. Why? Testing SAP updates is often a lengthy, manual ordeal. Business processes tests may be outdated — or worse, undocumented — making the exercise frustrating and error-prone. And these testing duties are piled on top of their already busy schedules. Some key users have admitted to me that, to hurry things along, they primarily test use cases which they know will pass. Their strategy: “We test for green!”

The problem with hypercare

None of this is news to SAP operations teams, of course. To deal with the lack of effective pre-release testing, they routinely add a “hypercare” phase immediately after the go-live of an SAP update. Hypercare is an “all hands on deck” period during which the organization’s most expensive resources (typically developers and project staff) are put on standby to fix emergency issues as they pop up in production. To be clear — these are issues that were not discovered in pre-release testing, when they would have been significantly easier and cheaper to fix! Because hypercare phases are so common — and so costly — there are companies which specialize in providing hypercare support to customers.

More than 90% of SAP enterprise customers [1] opt for this deployment strategy, which is as lengthy as it is expensive. Key user testing typically lasts one to two weeks. A hypercare phase can last up to three months, during which much of the burden caused by defects is felt by — you guessed it — those poor key users. 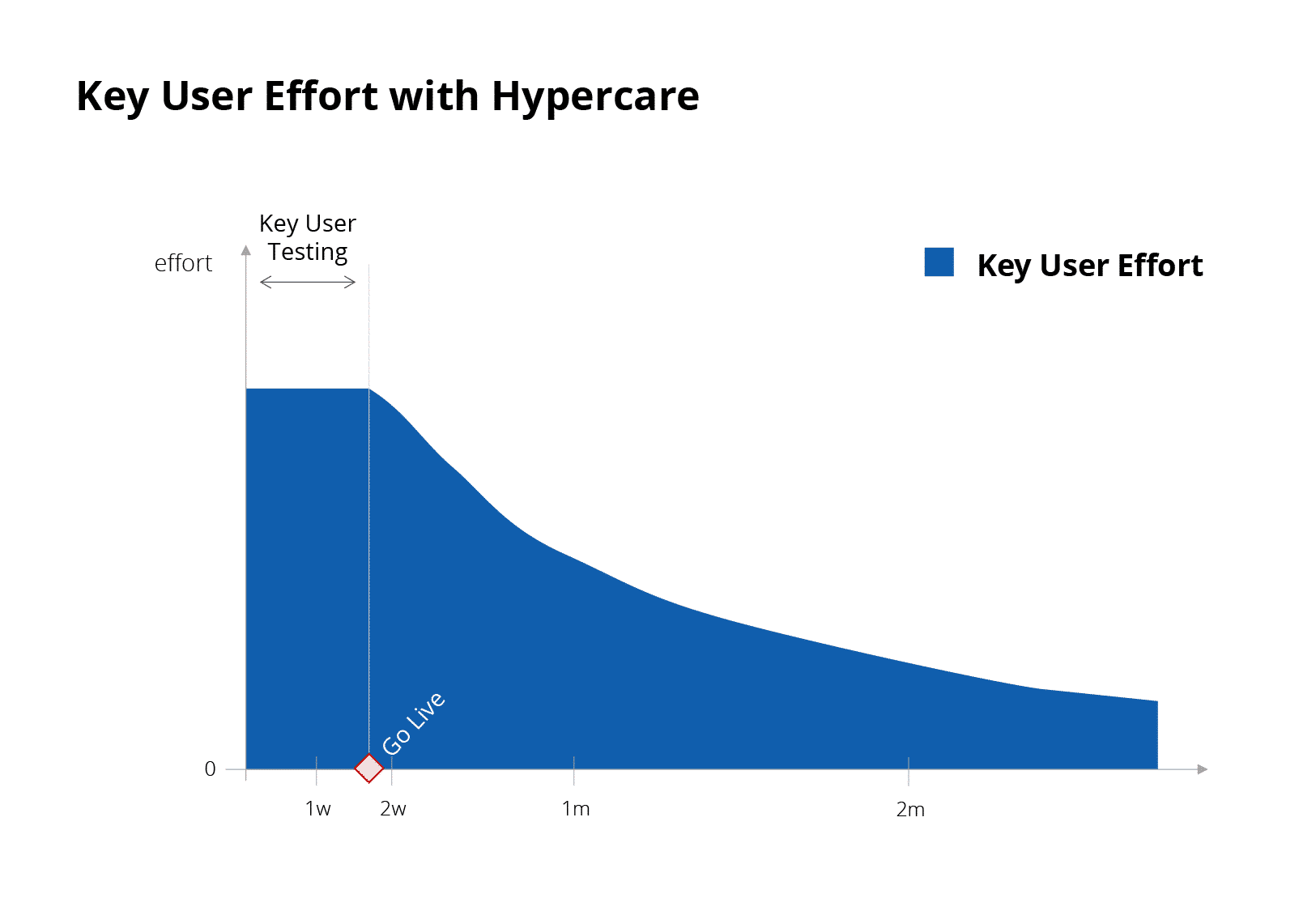 Honestly, I do understand why organizations choose this approach to testing SAP applications. After investing millions into other companies’ testing solutions, many very large enterprises come to Tricentis. Despite their heavy investments, they did not get the benefits they expected. So why not stick with key user testing? For the majority of you that rely on key user testing + hypercare, I have bad news and I have good news.

You can think of LiveCompare as a super-precise laser pointer. It pinpoints exactly what needs to be tested in a given SAP update based on whether the changes put an object at risk. LiveCompare’s analysis starts with identifying code changes and the affected objects. Using AI, LiveCompare then narrows down the number of objects using “most-at-risk” detection, factoring in usage data from production. So instead of wasting time testing all the things that aren’t impacted by an update, key users can test only the right things. It’s a lot faster that way! 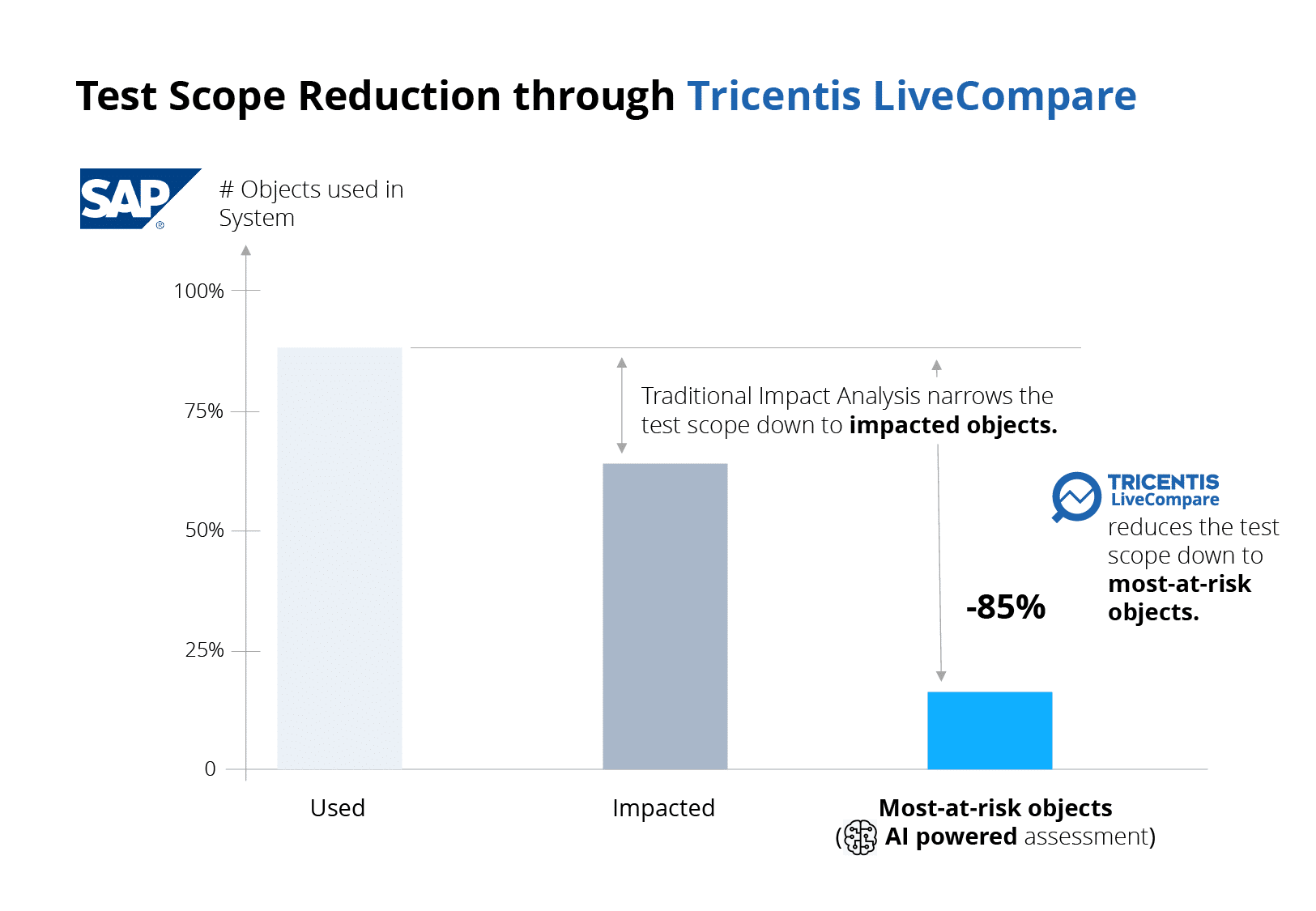 In fact, LiveCompare customers reduce testing efforts by 85% or more[2] by focusing their testing precisely on the objects that are most at-risk from an update. Not only is this approach faster, it’s much more efficient at uncovering defects. The number of defects that hit production are reduced by 75% – 95%, sometimes even 100% (no defects in production!). 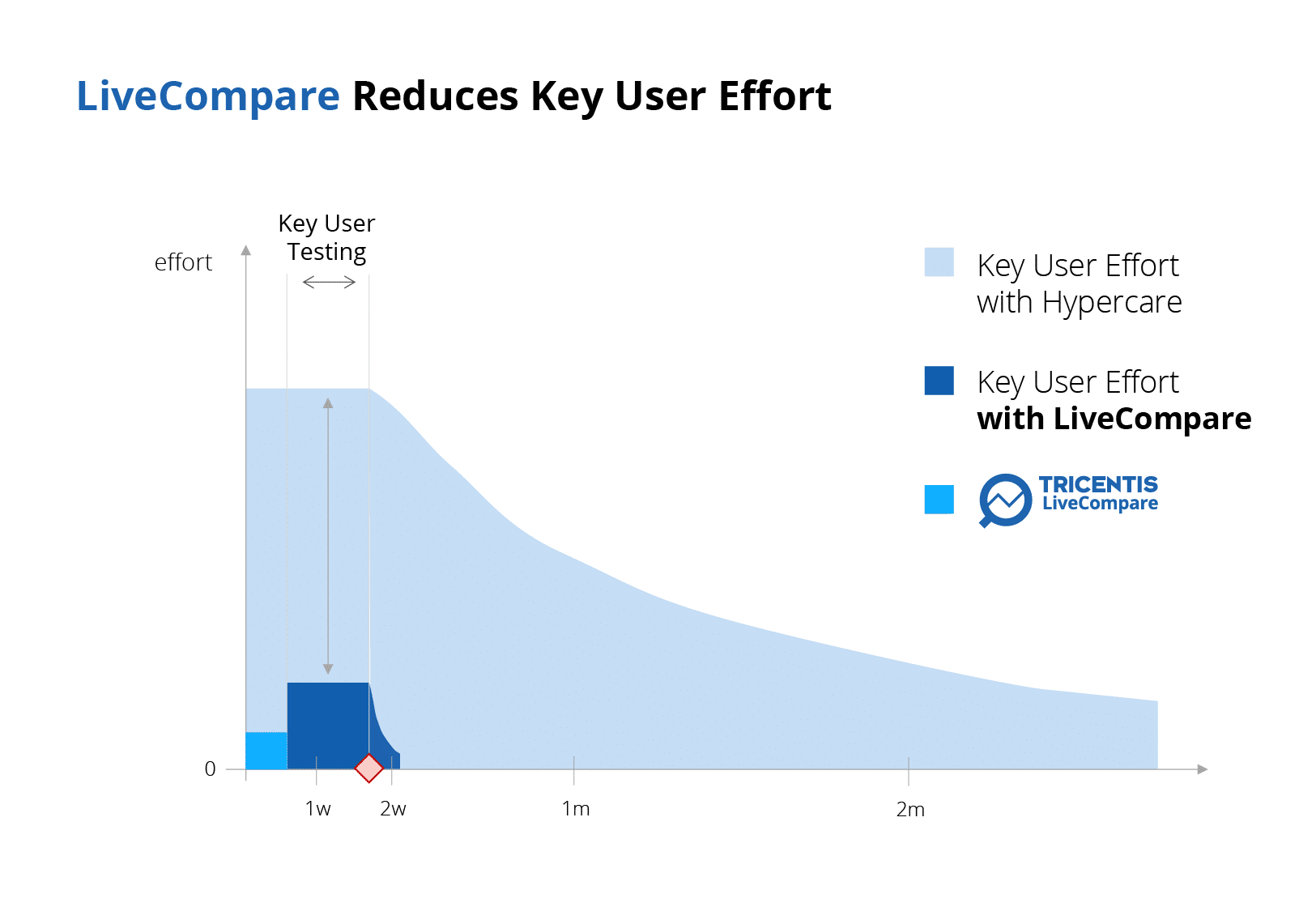 This is not a complicated process and it is completely non-invasive. There’s no need for heavy ramp up of SAP Solution Manager. No need for dynamic TBOMs to be recorded and maintained. No need for business blueprints to be provided as a basis. No need to send your data to some cloud repository for further analysis. No compliance or privacy issues. LiveCompare customers typically find:

A global apparel company we work with used LiveCompare to deliver an 8 year back log of SAP support pack changes to their core business systems. This involved over one million object changes and 62,000 SAP notes. Using LiveCompare, they got up-to-date fast, safe, and with zero defects or disruption to the business. Let me repeat that – they deployed an 8 year backlog of SAP service packs with ZERO DEFECTS and NO HYPERCARE REQUIRED!

See the results for yourself

I invite you to try LiveCompare for yourself. With just a two-day pilot, we can show you amazing results. In the pilot, you’ll install LiveCompare on-premise and use it to simulate your last SAP update.

With these results at hand, you will quickly see the benefits of LiveCompare. Not only in terms of ROI for a single update, but how using LiveCompare can dramatically reduce the costs and time-to-value of your larger SAP projects. We can’t wait to show you how cool this is, so contact us now to get started!

How to build a world-class testing team: Advice...

SAP and Tricentis RISE together

Hear about the strategic partnership between SAP and Tricentis, and get an update on where the partnership will go in the future.

The future of low code and end-to-end test...

In this Roadshow session, hear our product experts discuss updates on where the future of end-to-end test automation is heading.